I really enjoyed this challenge - it was a fun puzzle to figure out! f0xtr0t and I worked on it together, and we were able to contribute different skillsets to solve it. You can see his write-up here, which covers a lot of the tooling side of things I skim over.

On to the challenge! We’re given x.pyc and patch. But it seems like we can’t run this .pyc file with the given Python version for some reason…

A Bit About Python

What is a .pyc file? If you’ve worked with Python before, you may have seen these files in a __pycache__ directory in your project’s folder. These files are generated by the Python interpreter, which amongst other things, compiles your script into Python bytecode, and stores it in the .pyc files.

Why does it do this? When Python runs, it normally compiles scripts into bytecode and runs it in memory. To save a little bit on time, it can do the compilation ahead of time, so that during runtime it just runs the existing bytecode. 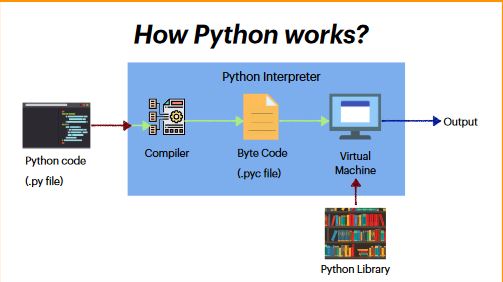 Reading patch, we can see that they split the opcodes into two sets - the first 90 and next 86- and randomly permutate their values. So the .pyc file we’re given is generated with these randomized opcodes and we need to figure out the permutation. Once we’ve done this, we have two options to grab the flag - patch cpython ourselves with those permutations and run x.pyc or write a decompiled version of x.pyc that we can run with a standard version of Python.

Some key points that f0xtr0t and I took advantage to unravel the new opcode-value mappings:

I looked for structural similarities between test.pyc and x.pyc and made guesses on a large number of the bytecode values — something that I found hard to put into words. Yay for pattern recognition?

Honestly, to each other, the other’s work was ✨magic✨. But it got the job done. 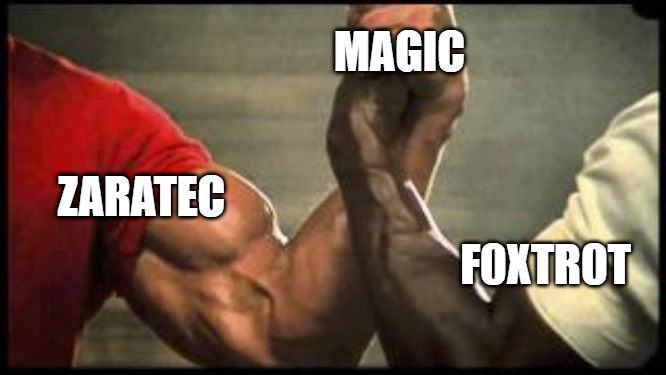 We want to make sure any Python .pyc we generate is as close as possible to x.pyc. Python bytecode and its structure can change pretty drastically between versions, so we need to make sure we’re using the same version.

This should generate the exact same Python bytecode and structure as that in x.pyc, except of course without the opcode values randomly shuffled.

I ended up combining the code from this blogpost and pycdump into dump.py to dump both Python bytecode and additional information** - number of arguments, constants, names, variable names, etc. Note that we have to run it under the 64113a4ba801126028505c50a7383f3e9df29573 commit.

On the other end, we needed a way to start disassembling the x.pyc bytecode using our guesses for the opcode values. f0xtr0t worked on this, and while he initially started out by tweaking dis and opcode to use our guessed values, we quickly ran into some issues. The disassembler would disassemble a few opcodes correctly, but then all would skip over several bytes. After a lot of digging in C land, f0xtr0t pinned this on the fact that marshal reads and uses opcode … while we were modifying opcode and dis. Turns out running Python code that does stuff with opcode while we’re updating opcode with our guesses isn’t a great idea.

A few hours into us working on the problem, f0xtr0t opted to switch to a manually-written disassembler, as he figured it’d be a lot less work than dealing with the marshal madness. (It was!) The custom guess-disassembler can be found here in manual_disassemble.py. This tooling was absolutely key to making it past a certain stage, providing information that clued us into certain opcodes’ purposes.

I provided the code object bytecode offsets and sizes to pull from x.pyc:

Bear with me as I attempt to make sense of my brain’s thought process.

The string dump of x.pyc reveals a few module names – random, sys, and time. We can write a test script that imports them, and then compile and dump it with our tool.

Each import corresponds to the following bytecode, where N is the Nth import:

So we have guesses for the new values of LOAD_CONST, IMPORT_NAME, and STORE_NAME:

Glancing back at the strings dump, we see mention of main. We can make an educated guess that there’s at least one function, main, maybe more. What does this look like in compiled bytecode?

Functions start with a RESUME 0 and end with a RETURN_VALUE. This checks out with the dis documentation where RESUME 0 indicates the start of a function for “internal tracing, debugging, and optimization check” purposes.RETURN_VALUE will return the value at the top of the stack to the calling function.

The <module> code object creates all the functions in the script, storing their code objects under their names. This happens at the very beginning of <module> after modules are imported.

We know the values for LOAD_CONST and STORE_NAME, so we can easily looking for this pattern to figure out the value of MAKE_FUNCTION. We find 7 instances of it, suggesting that there are 7 functions, including main – ks, cry, fail, game1, game2, game3, and main.

We know the values of RESUME, MAKE_FUNCTION, and RETURN_VALUE:

Some Functions Like print and sys.exit Have a Well-Known Structure

Functions’ code objects are followed by the const and name tables. We can see one of the code objects has some interesting values:

With "Thanks for playing!", print, sys, and exit, we can guess that the structure of this function looks something like the following:

Decompiling this with our dump tool, we get the following for func:

It seems like the way print and sys.exit’s code objects are grabbed is different, but the actual calling of the function is the same:

NOTE: We decided that 0x20 must be padding or NOP-like opcodes, as there were a lot of them — too many to make sense to be anything else. f0xtr0t set up our guess-decompiler to ignore them.

Both this print and sys.exit would have static values. These values would be grabbed from the constants table and pushed onto the stack immediately before PRECALL using the LOAD_CONST opcode. We already know that LOAD_CONST is 0x60 and can see the 0x60 0x01 and 0x60 0x02. We can assume that these are respectively "Thanks for playing!" and 0.

Now the last thing we need to figure out is the way that print and sys.exit’s code objects are grabbed. From our example, we see print is only a LOAD_GLOBAL, whereas sys.exit is a LOAD_GLOBAL followed by a LOAD_ATTR. We see this pattern with B9 00 for print("Thanks for playing!")) and B9 02 BC 02 for sys.exit(0).

Now we have the following new opcode values:

game2 likely deals with a lot of math operations

The strings for the game2 function mention several math operations: sum, difference, product, ratio, and remainder from division. We can write a function to perform these operations. 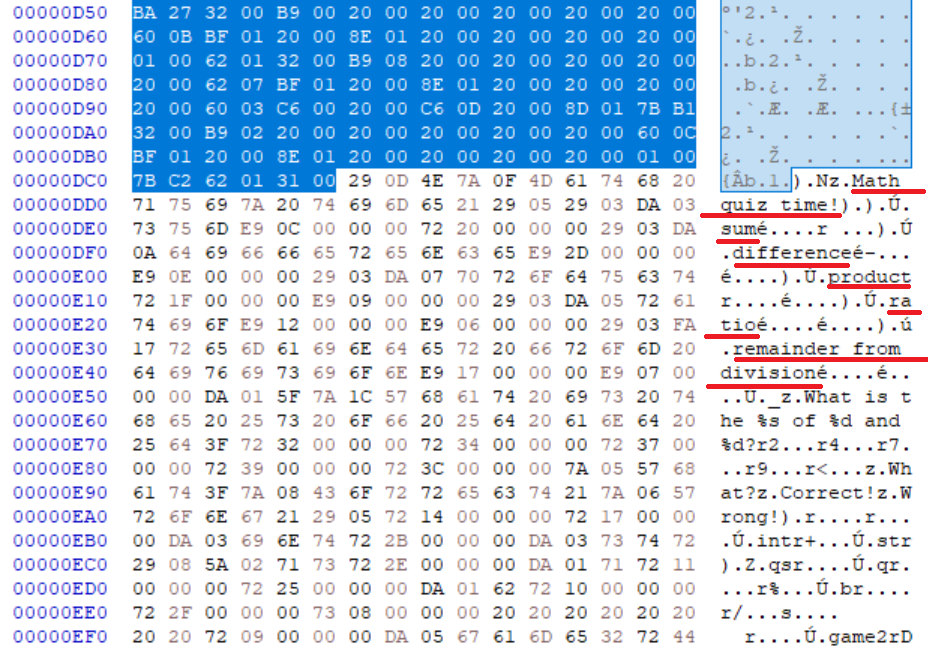 Rather than using individual opcodes per each arithmetic operation, the Python compiler opts to use the BINARY_OP for each, with the argument specifying the operation. We can see the values for each operation listed in opcode.h. So we should expect to see an opcode with arguments 0x00 (sum), 0x0a (difference), 0x05 (product), 0x02 (ratio), and 0x06 (remainder from division). There are two instances of 0x0a as an opcode argument: C6 0A and 60 0A. We already know the latter is LOAD_CONST, so it’s very likely 0xc6 is BINARY_OP. 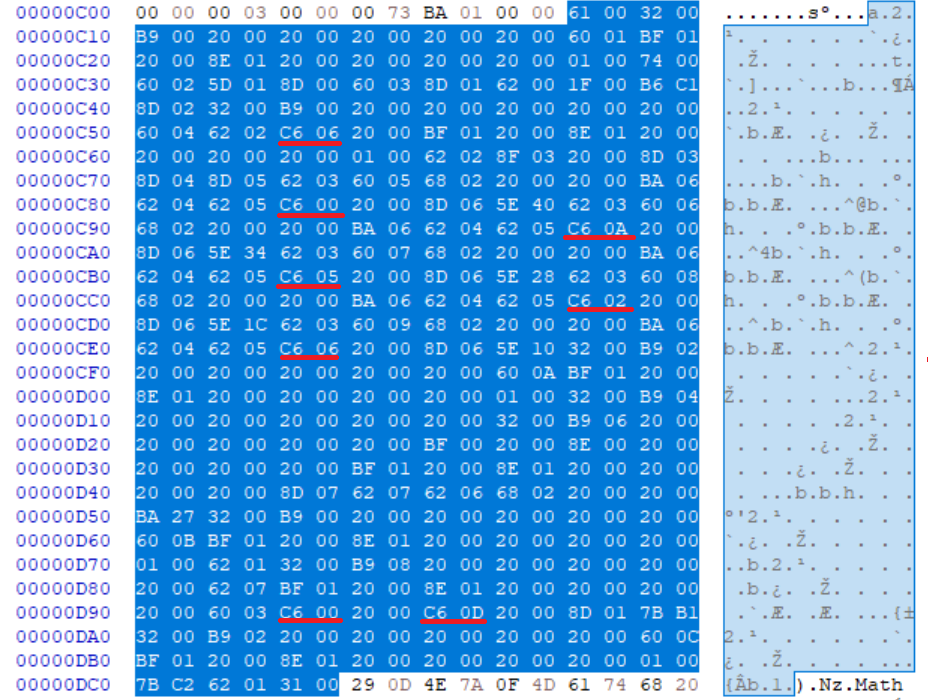 We see that there’s a cluster of 6 instances of this opcode with the expected arguments, and two more uses later on, probably some additional calculations (ADD and INPLACE_ADD).

At this point, while f0xtr0t was writing a custom decompiler, he noticed that there may be a stray code object, w in code1 that didn’t match up to any of the 7 functions.

He theorized that it could be a function defined within a function:

In the test w, we can see the number of arguments are defined at a set distance (0x19 bytes) away from the start of the bytecode.

We see that w in x.pyc has 3 arguments.

Our test w starts out by loading arguments via LOAD_FAST. We see a pattern of 62 00 62 01 immediately after RESUME, suggesting that these are LOAD_FAST opcodes for the first two arguments. Sometime later, we see 62 02 to load that last argument.

Going back to game1, the function w is defined with a combination of:

Since we already know LOAD_CONST and MAKE_FUNCTION, we can look for this pattern towards the beginning of game1’s bytecode.

We see this pattern at the beginning of game1 and considering we haven’t figured out what opcode 0x8d is, it’s likely that it’s STORE_FAST.

With this, we have everything we need to fully decompile w:

The Rest of It

At this point, f0xtr0t upgraded his customer decompiler to dump additional code object information - name, # of arguments, bytecode, constants, names, variable names, etc. This was a tremendous boon to the rest of our reversing. From here on out, we were able to figure out the rest of the opcodes by disassembling and decompiling x.pyc function by function, and attempting to identify the few unknown opcodes left.

Many of the sequence, string, and list-related opcodes were amongst the last to be figured out, as they oftentimes required some context of the function.

For example, context from the beginning of game3 being decompiled led us to identify LOAD_METHOD —

Thinking like a programmer, it’s likely that text is being split into separate words. Sure enough, split is in the names table and matches up to index 2.

As I started decompiling the functions as best as I could, f0xtr0t worked on identifying and adding control flow, adding the concept of jump markers to the custom disassembler. 0x50 acted as a nop, but seem to denote where a jump/goto would land. He also noticed the use of yield & iters, and added those related opcodes in.

The gist of the script was to play and win each of the 3 games. Each game would return a value that was appended onto the end of seed, which started as "seed:". The final seed would be run through cry with 50 bytes to produce the flag.

While we were cleaning up the script, I decided to yeethaw it and see if my current decompiled version worked well enough. And it did!

All in all, this was a pretty fun challenge that required f0xtr0t’s and my combined expertise to complete. 😁

For this problem, we are provided with a USB PCAP. These types of challenges typically will hide the flag in a way that’s associated with the purpose of the USB device (ie. typing out the flag for ...